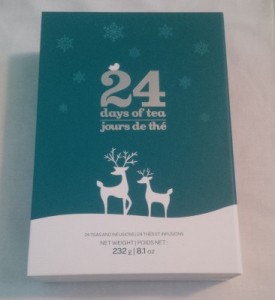 Okay, so about a month ago, some of you may remember my original 24 Days of Tea post. This is the tea advent calendar from the company David’s Tea which originated here in Canada. I don’t like tea but my mom really does and for awhile she had been interested in loose leaf teas but she hadn’t tried any.

In about July (that may not be right, it was the summer anyways), I found out about the 24 Days of Tea and thought it would be the perfect way for her to try a bunch of different flavours of loose leaf teas. If she hates them all that is okay, at least she has the chance to try them though.

Today was the day we finally got to get started and both of us were super excited! I am going to try and remember to blog every day about what the tea was for that day and what my mom thought about it. She tends to drink simple black teas but she is open to trying all the kinds she gets in the calendar. For all we know, one could sound awful and end up being a dark horse.

It looks all normal when it’s loose. But steep it and you’ll see that it’s nuts. Within seconds, this tempting jumble of almond slices and chunks, apple bits and cinnamon bark starts turning a crazy shade of pink. Why? Because it contains a hint of beetroot. That’s what gives this rich almond tea its earthy depth and its all-natural signature colour. Deliciously nutty, decidedly addictive. Caffeine-free.

Now, I have to start off by saying that this is the cutest packaging ever. The tea for each day comes in a little tin which keeps the tea fresh and just adds to the beautiful presentation. Each tin also says the tea name on the bottom so you know which one is which.

I had read some reviews of this advent calendar before I bought it and people had said you could get 2-3 cups of tea from each day. My mom doesn’t make her tea super strong so I think she can probably get 3-4 cups out of each day which is great!

We always love to see how the teas change after they have been steeped. My mom was guessing what was in this one and from sight she had guessed apples, almonds, and cranberries. What she didn’t realize was that David’s Tea puts beetroot in some of their teas so that it brews pink so it wasn’t cranberries she was seeing, but rather the beetroot!

Pink is her favourite colour so I knew that she would be excited about this! It really does look beautiful. She of course said, “well if I knew you would be taking pictures of my tea, I would have used a fancier mug!” However, we are creatures of habit so she and I tend to use the same mugs everyday. Hers is this adorable Winnie the Pooh one.

I’m off topic. Anyways, while sipping away on this, she knew there was a flavour she couldn’t place and it ended up being the cinnamon bark. She said that she knew there were almonds because she had seen them but if she hadn’t seen them, she would have thought it was an apple cinnamon tea. She isn’t crazy about tea but said this was fruity and sweet, and quite nice. She tends to make big cups of tea for herself so she said it was a little like pie where it gets to be a bit too much near the end but she will definitely drink it again.

She didn’t hate it (and she isn’t a fruit tea kinda gal) so this was a successful first day of the advent calendar!  Stay tuned tomorrow to find out what tea we find behind door #2!

Disclaimer: Tea description taken from the David’s Tea website. Advent calendar was paid for with my own money and all pictures and opinions are my own/my mom’s.

There is no better way, than your way.

Life, weirdness & mixture of just about everything.

I love to cook and eat...and I run to fit into my apron!

True Murders: A Look Inside the Minds of True Evil
A Newly Minted Sub Box Addict

Discovering new things one box at a time

Levelling up my life in a series of challenges

something to honk about

Musings and other thoughts on beauty.

I love my roommates but...

... Sometimes I wonder about them

The Journal of a Beautiful Mind

My thoughts, words, ideas and experiences as a young writer.